In the life of my company we have turned away more inbound solicitation by VC firms then I can remember. Jr. partners and research analysts fill my inbox with polite requests for a meeting to discuss Pagely raising a round of investment. One in particular I remember seems to blanket the whole segment as in each email they would reveal who else was raising capital and that we should take their cash as well so as not be ‘left behind’. Even Automattic, the 800lb gorilla in WordPress, and a backer of 2 our competitors politely offered a few bucks to ‘show support’, not sure how genuine their support is when backing other horses in the same race. On the flipside, in 2011-2012 we toyed with the idea ourselves and spoke with a few VC firms to explore the waters.

With each, and every conversation, the outcome has been the same. It’s just not what we want to do right now. The reasons sometimes change but they are always rooted in the philosophy that as founders, Sally and I feel our customers should always be the top priority.

“We do not have investors, we have customers. We exist only to serve them.” Who said that? I did.. about once a month for the last 4 years.

My friend Micah said this yesterday on the subject:

If you are building a venture backed company, you are not building a company to feed your family, you are building a company with an expected return. You will have to sell it privately or publicly. Your investors goals may (or may not) align with yours. But the only goal of a venture backed company is the big exit. It’s what gets lost in the game. I dont care if you want to change the world, if you take venture money the goal is the exit (and if you change the world along the way, great.) If the entrepreneur doesn’t want to operate in that reality, don’t take the money. – Micah Baldwin

We never took the money.

With every announcement of a big raise heralded as a milestone of success by the myopic press covering the tech sector there is the story of a founder being demoted, kicked out, or burned out by his new VC controlled board. There is the story of the founder’s wife (a co-founder herself) that was cut from payroll and pushed out by the lead investor without even consenting the other founder, her husband. There is the Founder+CEO that makes the blog post about stepping over to new a title as CTO or CMO or “Chief of product awesome”, but it all sugar-coated fluff papering over the real fact that the ‘adults’ with the money made the decision and let the guy take the new title to save some face. 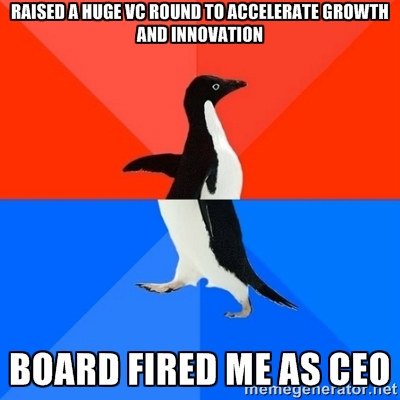 A company that once existed to serve it’s customers and founders, now serves the board and the preferred stock shareholders. Customers are no longer the life blood of the company, they are wallets to extract shareholder value from via upsells, cross-sells, cost-cutting, and lock in.

I have many friends in this world of venture backed companies. And the common thread between all of them is the frustration of always being on the brink of running out money and needing to go raise more. Which means further diluting their own shares and their financial incentive to work in the company they started. It also means another seat on the board given to someone who’s only goal is to to achieve a return on their investment, no idealistic founder, or set of company values are going to stand in their way.

In our WordPress space I look at Envato as a role model. Self-funded, great set of company values, and very very successful. They know what got them to that success, and it was not outside VC pushing for an IPO or exploding the top line to increae valuation, it was treating their employees and authors/customers right and making sure everybody won along they way.

If you raised a VC round and still lead and love your company, and your customers still love you. Then you sir/ma’am have my congratulations. Dead serious, you beat the odds and I applaud you.

Maybe one day we’ll raise a round. Until then I would like you to meet our current investors.